We’ve all had to adjust our routines since the pandemic — with many people pivoting professionally. Phoebe Tonkin is no different.

When Hollywood productions halted in March because of the novel coronavirus, the actress and environmental activist used the downtime to revisit an idea she’d previously put on the back burner.

Earlier this month, Tonkin teased the new project on her Instagram account alongside a photo with the word “LESJOUR!” in red. The mysterious post left Tonkin’s 6.1 million followers Googling what the word might mean.

The answer is officially out of the biodegradable bag. On Thursday, Tonkin launched Lesjour!, a sustainable loungewear collection. It consists of six pieces (four tops and two pants) in two colorways (black and red) with each piece sold separately for $198. The sets, fashioned from earth-friendly material, are exclusively available for preorder on lesjour.com in sizes XS to XXL.

Although Tonkin had long contemplated creating a sustainable fashion line, its aesthetic was ultimately inspired by her off-duty wardrobe and pandemic lifestyle.

“I felt like I was changing four times a day but in the same variation of pajamas,” Tonkin told The Times over Zoom in mid-October while clad in a red Lesjour! top, which she paired with gold hoop earrings by Oma the Label. “Then the pajamas would elevate to sweatpants to go to the grocery store and then I’d come back and put something else on.” To minimize wardrobe changes, the 31-year-old decided to design a modern take on the traditional 1970s leisure suit. “I wanted to create something that was tailored, that was flattering, that was most importantly comfortable but was also really chic and classic,” she said of the various styles, which include cardigans, long-sleeve tops and wide-leg pants.

Based in Los Angeles, Lesjour! is a quintessential West Coast brand. “I definitely feel it’s been influenced by the ease of living in California,” Tonkin said, adding that each garment is made in L.A. with all orders dispatched from the brand’s local studio.

“I moved back from New York to L.A. to do Lesjour! full-time,” she said, explaining she has lived between the two cities but decided midquarantine to get out of her East Coast lease to focus on the new endeavor. Tonkin drives to downtown Los Angeles every few days to visit the manufacturer. Otherwise, she works from home.

“The less impact on the environment, the better,” she said, adding that the factory is within a five-mile radius of her home.

Because Tonkin is as passionate about the environment as she is about fashion, sustainability is built into her brand’s ethos. The entire line is made of Ecovero by Lenzing, a Los Angeles-knitted renewable viscose made from regenerative wood pulp.

“I’m excited to be one of the first companies to be using it,” Tonkin said, adding that the fabric has a “cashmere, super-soft feeling” but that each tree used to create the fabric is replanted using regenerative farming practices. Tonkin found the material while researching earth-friendly alternatives. “Fabrics like Ecovero are next-level innovative — the future of fabrics,” she said.

Ecological considerations can be seen in every last detail. Orders are shipped using the Better Packaging Co.’s limited-edition, reusable, biodegradable gift packaging. Additionally, each garment is void of a tag. “Why would we need hang tags?” Tonkin said. “If someone is going to wear it and send it back, they’re going to wear it and reattach it anyway. It’s just extra trash.”

While most companies have yet to consider their carbon footprint in such a comprehensive way, Tonkin said she doesn’t necessarily want Lesjour! to be considered “this shouting-from-the-rooftop-sustainable brand.” Her feeling is that she does “all of that homework for the consumer so they can trust us. It should be a given now if you are creating anything more to put on this planet, it should be sustainably minded. … That should just be expected of new brands.” 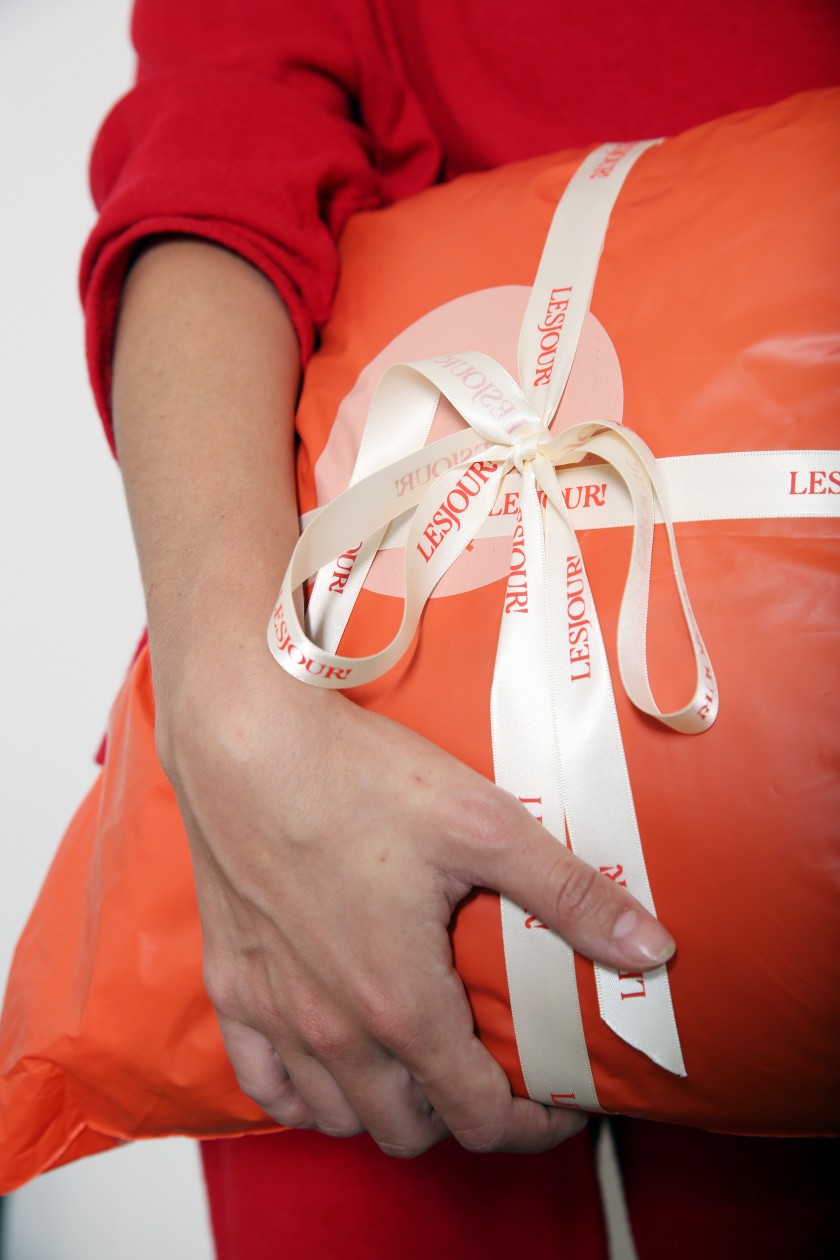 Tonkin acknowledged that some consumers’ eyes might glaze over the word “sustainability,” which can feel like a buzzword but part of that may come down to its ever-shifting definition. In many ways, consumers don’t know what the word means because, according to Tonkin, fashion companies are still navigating the best route for minimizing their carbon footprint.

“Everyone’s trying to bet on what sustainability is,” Tonkin said, noting that deadstock was at one point a trend before realizing it wasn’t doing much. She hopes companies continue to consider sustainability so that it becomes an industry standard. Kering, which owns Gucci, Saint Laurent and Balenciaga, employed a chief sustainability officer, while LVMH Moët Hennessy Louis Vuitton, Armani and Vivienne Westwood have joined initiatives to offset their carbon footprint.

Tonkin maintains the onus is on the fashion industry to do better. “The consumer’s main objective should be buying something cute that looks good on them,” she said, “and then everything else is what we do behind the scenes to make sure that they feel cute.”

Lesjour! plans to release a new colorway every six weeks and will introduce different styles next summer. “The plan is to start small and manageable,” Tonkin said. “It’s pretty much just us right now out of my house.”

While Tonkin often says “us” and “we” while discussing her new brand, Lesjour! is solely a one-woman-production starring Tonkin. However, she occasionally asks close fashion friends for advice or assistance. Case in point: model/actress Dree Hemingway styled and stars in Lesjour!’s look book, which was shot by photographer Alex Cramer in Tonkin’s living room alongside Tonkin and model Loreal Ellis.

Fashion, sustainability and friendship are often synonymous for Tonkin. While she’s an avid vintage clothing shopper, she said she understands that “people work hard, and they want to treat themselves and buy something new and special.” With this in mind, she’s been an ambassador for Chanel since 2017. That’s how she was first introduced to the environmental advocacy group Natural Resources Defense Council. The nonprofit benefits from a Chanel-sponsored Malibu gala thrown by activist Kelly Meyer each year.

Shortly after Meyer introduced Tonkin to her daughter Carson, the women lobbied in Sacramento on behalf of NRDC. “We were there to talk about pesticides and oil spillage in the California ocean,” Tonkin said, adding she has since become active within the organization and particularly close with Carson Meyer. The women hope to lobby in Washington, D.C., next. Tonkin has been interested in environmental activism for as long as she can remember.

“Being Australian, it’s sort of ingrained in how we grow up,” said Tonkin, who has been a working actress since her teen years. “It’s not something that I’ve had to really teach myself. It’s just the way I am.” Tonkin moved to Los Angeles at 20 — and found driving to be more daunting than anything else. “I failed my driver’s test about five times in Australia and then finally got it a day or two before I flew over here,” she said with a laugh. “My first impression of L.A. was driving on the L.A. freeways 24 hours into having my driver’s license. It was terrifying.”

From there, it has been full speed ahead. Tonkin booked several CW series including “The Secret Circle,” “The Vampire Diaries” and “The Originals.” Most recently, she starred on Hulu’s “Bloom,” a drama with fellow Aussie and Oscar nominee Jacki Weaver. Tonkin also wrote and directed a short film called “Furlough” and appeared on HBO’s “Westworld.”

While filming has taken her in and out of town over the years, Los Angeles has remained a home base. “I’m definitely an Angeleno now,” Tonkin said. “I love the California lifestyle. L.A. is such a great starting point for adventures and experiences.”

She said her quarantine routine has included early-morning trips to the beach. “I was so nervous about going to the beach during everything,” she said. “Then the last month, I’m like, ‘Mentally, I have to go swimming at least once a week.’ I’ve driven to Malibu — just swam for 20 minutes — got back in my car in my wet swimmers and driven home.”

Tonkin doesn’t know what the future holds, but she’s embracing the journey. “Because I’m an actress, I’m waiting for the phone to ring ordinarily to give me permission to be creative,” she said. “Being able to be in control of my own creativity, in control of my own life, my business — all of those things — has been such an amazing realization for me.”

She credits Lesjour! as contributing to her positive outlook during the pandemic. “This is the calmest and most excited and grounded I’ve felt in a long time,” she said.