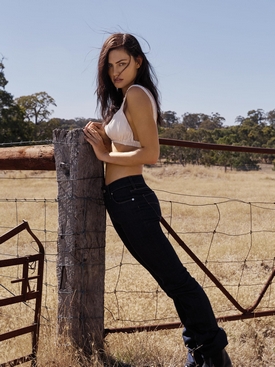 Projects bring her home on a regular basis, and she was in Australia earlier this year – including for a fashion shoot with Stellar at a rural property outside of Adelaide.
END_OF_DOCUMENT_TOKEN_TO_BE_REPLACED

By admin, on March 21st, 2020, under Interviews // Comments Off on Phoebe’s Iconic New Role

The coronavirus pandemic has had a serious impact on many industries around the world, including the entertainment business as various films and TV shows have halted production to protect cast and crew.

But just before the outbreak, production wrapped on the highly anticipated second season of Stan Original series, Bloom.

This morning, I got on the horn to Australian national treasure, Phoebe Tonkin, to discuss the new season of the award-winning series.

Tonkin, who is currently in isolation in LA, shared that while the first season is “all about grief and mourning,” season two is “a bit more hopeful, there’s a lot more colour.”

There’ll be more Bloom-related tea from our chat to come closer to the release date so watch this space, but in the meantime I wanted to suss out how Phoebe is going with self-isolation.

“Yeah good, I’m just trying to stay inside and not go out in public,” she said.

“[Staying indoors is] pretty weird but I think everyone needs to adhere to what’s being said and take responsibility and be accountable and stay at home. There’s a lot of book reading and movie watching right now.”

Naturally I wanted needed to know what her isolation reading / viewing material consisted of:

“Right now I’m reading a book called Three Women (by Lisa Taddeo) and I’ve been watching Curb Your Enthusiasm, which is amazing,” she shared.

Some A+ recommendations there, Three Women is an acclaimed novel that debuted at number two on the The New York Times Best-Sellers List, and, of course, Larry David’s comedy is always a good idea.

And in terms of social distancing, Phoebe said that she’s “in a lot of group chats right now” and that she and her mates are even “planning on doing a pilates class on FaceTime so we can all work out together.”

A bloody genius idea as it combines two self-isolation essentials: staying in touch with your pals and keeping up with your fitness.

She acknowledges that although she’s “fortunate” enough to “have the means to be able to stay at home,” many folks “don’t have that luxury.”

So she urges people who do have the luxury to work from home to do so.

It’s hard to know how long we’ll need to remain in self-isolation, but if we’re still on lockdown by the Easter long weekend, at least we’ll have Bloom season 2 to binge-watch for a bit of escapism.

“That’s what I think is so great about the show, it’s grounded enough that it’s relatable but you still feel like you can escape into the show through the characters,” Phoebe said.

“It’s a show that’s made for bingeing, that’s how it’s filmed, so you can sit at home and watch all six episodes.”

The entire first season of the Stan Original series is now streaming so get check it out before the second season drops on April 9.

By admin, on March 17th, 2020, under Interviews // Comments Off on Phoebe Talks ‘Bloom’ & Self-Isolation with Pedestrian

Interviewed by those who know her best, including friends.

Phoebe Tonkin is a woman with a conscience—and a good friend.

“I’m really lucky that I have some beautiful, wonderful friends and we support each other, and I can’t imagine a world in which we wouldn’t,” Tonkin says. “My friends are a really strong, feisty, supportive, goal-oriented and balanced group of women. They all collectively inspire me in different ways.”

Environmental activism is one of those ways, and it isn’t always easy. Tonkin had to learn pages and pages of dry facts and figures when campaigning with her friend and fellow actor Carson Meyer to encourage the Californian congress to ban an agricultural pesticide that can make children sick. But her efforts paid off, and the chemical was banned.

Tonkin has also worked with the Climate Council, and uses her 5.4 million-strong following on Instagram to spread crucial information on climate change and green activism.

“We are in a climate crisis right now, and there isn’t enough being done,” she says. “It’s too late for small changes—we need to look at bigger ways to make a difference, like pressuring banks to stop investing in coal mines.”
END_OF_DOCUMENT_TOKEN_TO_BE_REPLACED

Hello, everyone! Recently, we were able to get our hands on some interviews and featurettes for the Phoebe’s series Bloom! Below you will find the featurette ‘A New Wave of Australian TV’ along with screencaps from the interview and some filming clips.

By admin, on January 21st, 2020, under Interviews, Television // Comments Off on A New Wave of Australian TV – ‘Bloom’ Featurette

On our fourth day of Phoebemas, I give to you Grazia upgrades!

As a bonus, I’ve also provided a translation of Phoebe’s online interview with them (well, to the best of my ability…I don’t speak French). Enjoy!
END_OF_DOCUMENT_TOKEN_TO_BE_REPLACED

Back of the Benz with Phoebe Tonkin


By admin, on December 1st, 2019, under Interviews // Comments Off on Back of the Benz with Phoebe Tonkin