Why Phoebe Tonkin Came Home for her Latest Role

It was New Year’s Day last year, when actress Phoebe Tonkin set herself a very specific career goal. “I wanted to work in Australia on a project with a social conscience, and with extreme beauty maestro [director] Glendyn Ivin.”

Just a few months later, at 5am in Paris, a very jet-lagged Phoebe answered the phone to hear she’d booked a lead role in Safe Harbour, the new SBS drama about asylum seekers directed by Ivin. It was a job that “perfectly encompassed” that New Year ambition. “Manifest away my friends, and don’t be ashamed to dream, there’s still some witch left in all of us,” the 28-year-old told her 4½ million Instagram followers.

A psychological thriller, Safe Harbour couldn’t be more different from The Originals, the American vampire series Phoebe has spent the last five years filming in Atlanta. And it’s a world away from H20: Just Add Water, the Channel Ten kids show that first brought Phoebe to the attention of audiences – and for which she’s probably still best known here.

Phoebe is now counting on Safe Harbour to transform perceptions of her, so she can break out of her fantasy-character niche and firmly establish herself as a serious actor at home and abroad. “I have high hopes that this show will reintroduce me, especially into the Australian industry, as a different actress than maybe I was expected to be,” she tells me, curled up in jeans and a black cardigan in an inner-Sydney studio, her hair still damp and her face free of make-up. “I’ve been really dying to work in Australia for a very long time.”

Safe Harbour is an expression of Phoebe’s deeper, political self – yet on the surface she appears very much an It Girl. She grew up in Mosman, on Sydney’s lower north shore, and attended exclusive all girls’ school Queenwood, swimming at Balmoral Beach across the road every morning. Her mother ran the local toy store and her dad has his own travel business. Her younger sister, Abby, works in finance and lives in New York.

While Phoebe says the Tonkin family are “brainy and nerdy” rather than creative types, they are serious movie buffs. A childhood ritual was heading to the cinema together every Thursday night to see the latest release. “I grew up feeling like the cinema was a really special experience [but] I was kind of like the black sheep, the fact that I actually went into the industry,” she says.

Capitalising on her super-fine bone structure, pronounced pout and leggy gait, Phoebe has a well-developed side hustle as a model: she’s an ambassador for Chanel, and has starred in advertising campaigns for the likes of Aussie swimwear brand Matteau and LA denim label Frame. Yet she confesses she was self-conscious growing up. “I was shy, I was always just a little aw-w-w-kward,” she says slowly, drawing out the adjective. “I’m probably still awkward.”

She found a respite from these feelings in acting, joining Australian Theatre for Young People at 12, where she met a bunch of like-minded teens. “Acting felt like something that was my own, it was like this secret community of other quirky kids that I could spend time with over the holidays and after school. It was this really nice escape for me.”

Someone suggested to Phoebe’s mother that she get an agent, which quickly led to an audition for Home and Away. Phoebe missed out on that part, but landed the next – playing Cleo, a teenage girl who turns into a mermaid, on H20. “I didn’t have too long to decide what I was going to do for the rest of my life,” she laughs.

Phoebe had just turned 16 when she she got the role and within a week she had quit school and was on set on the Gold Coast. Three seasons of H20 led to her film debut in the screen adaptation of John Marsden’s young adult novel Tomorrow, When the War Began. Phoebe then moved to LA in her early 20s to chance her luck at pilot season, and quickly scored a role in The Secret Circle, playing a young witch. She was hailed the breakout star of the show, and subsequently cast as a secret werewolf in The Vampire Diaries, before taking a lead part in its spin-off, The Originals.

It’s fitting that a girl who claims to have “witch instincts” has spent most of her career playing supernatural characters. But as much as The Originals delivered Phoebe fame in the US, not to mention lifelong friends and a boyfriend for much of its run (co-star Paul Wesley), she started to yearn for something more.

“It was a big chunk of my 20s and I have so many great memories, but I was definitely ready to move on to something else,” she says. “It’s been hard to do the one thing for six years.”

Tired of playing “the witch or the bitch”, it took Phoebe some soul searching to figure out what she wanted in her career. Watching Olivia Wilde play the mother of an abducted child in the devastating 2015 film Meadowland provided the answer.

“I kept saying to myself, ‘That’s what I want to do, stories about real people, stories that ask people questions about flawed characters. Those are the kinds of roles I want.’ “

And then along came Safe Harbour, the story of a group of Australians on a sailing holiday to Indonesia who cross paths with a fishing boat overloaded with asylum seekers, sparking a cascade of moral dilemmas.

“I’ve definitely been dreaming of a role like this for a few years now,” Phoebe confides. “Now that I’ve gotten it I’m much more grateful for it.”

Phoebe plays Olivia, a troubled woman who is suspected of casting the asylum seekers adrift in the middle of the night. “This show is about decisions and the ripple effects that those decisions create. Olivia’s part in the whole situation posed a lot of questions about my own morals and ethics and I hope that her storyline does that for audiences as well.” 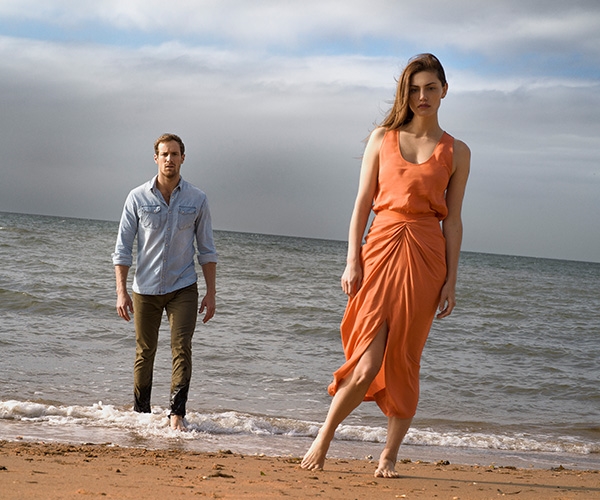 She hopes Safe Harbour will lead to other meaningful – and preferably Australian – roles. “I definitely realised that I gravitate towards more grounded work,” she says of shooting the drama. “I thought I would be terrified because it is really different to anything I’ve been in, but the challenge was just so exhilarating.”

While she calls herself a “professional Cinderella”, Phoebe is at pains to demonstrate her highly developed social conscience. Between glam red-carpet shots and acting stills on her Instagram account are calls to action on issues such as gun control, #TimesUp and #blacklivesmatter.

“If you’re going to use [social media] to talk about a product that you’re using or a movie that you’re promoting, then it’s equally important to use those platforms for something that’s more selfless,” she explains.

“If I can get a 15-year-old girl who is enraged about a certain relationship on a vampire show and get them equally enraged about the situation with black lives and police issues in America right now, then great.”

Phoebe proudly calls herself a feminist and bears the battle scars of navigating the male-dominated acting industry, with its inherent sexism and pay disparity. “It sucks to go through periods of your life where your role is literally Hot Girl No. 1 in movies – you feel like you are worthless.”

But she feels positive that the tide is turning in Hollywood, with the number of projects written and directed by women increasing. “It’s really important to show women who are not just offshoots of men. I would love to keep playing roles that challenge stereotypes of women, that educate the audience a little bit.”

Despite her A-list existence (her good friends include Teresa Palmer and Lara Worthington), Phoebe retains some of her childish shyness and reserve. Asked about her love life she visibly squirms and says “I don’t really want to talk about that”, and is equally reticent when it comes to explaining the origin of her tattoos (one on her wrist and the other on her foot). “I got them years ago – I probably wouldn’t get any more.”

She’s hesitant to discuss her flaws, but says that acting has taught her resilience, patience and independence. She finds being away from her family hard, and insists the reality of her globetrotting lifestyle is spending too many hours in airport terminals waiting for delayed flights.

“There are bouts of being alone and unemployed in weird countries,” she says. “I’ve had to create a bit of independence…and build up a bit of a tough skin. Any time you get close to a job and you don’t get it, I find that such a heartbreaking experience.”

But thanks to Safe Harbour Phoebe is confident about her future, as she weighs up roles and contemplates making her own short film. “When we made Safe Harbour we knew we were making something special. I’m now working out what’s next.”

“I would love to keep working here, I think Australian drama is unparalleled,” she says. “I feel like I set the benchmark so high with Safe Harbour that it’s hard to find anything of that quality – so yeah, high standards now!”