Phoebe Talks Hope and What’s to Come on The Originals

Hayley is about to get everything she’s wanted for the past five years. After last week’s successful mission to rescue Klaus, the Mikaelsons are back together, and Hope is going to get to know her father (along with her aunts and uncles). Plus, Hayley has the man she loves back, so what could go wrong? Well, on The Originals, the answer is usually: everything.

EW caught up with Phoebe Tonkin to talk about the family reunion, her character Hayley’s future with Elijah, and the little fact that her daughter could have a mystical evil coming after her. 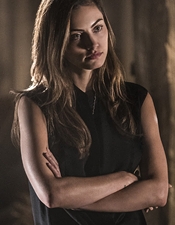 ENTERTAINMENT WEEKLY: After five years, the family is finally reunited. What does that mean to Hayley?
PHOEBE TONKIN: It’s relief, and a little bit of closure. All Hayley’s ever wanted was family and then she had to say goodbye to her family. All she’s done for five years is be on the run with her daughter and I think she got this massive relief because she can finally stay in one place hopefully, and she can give her daughter somewhat of a normal life hopefully. There’s a little bit of a weight off her shoulders now because that’s what she’s done for five years, but then obviously it’s not that calm for too long.

Were you curious about those five years? Did you talk to the writers about what Hayley had been up to?
I did ask them. I was like, “Maybe she went on a few dates or does she have some weird girlfriend that she made friends with?” [Laughs] She was very serious about making her focus just about the family and making sure that they were going to come back into her life and her daughter’s life. I think she spent a bit of time with grandma Mary, so I think grandma Mary was her friend over the last five years. I don’t know what else Hayley would’ve probably been doing besides looking for ways to get the Mikaelsons back and keeping a low profile.

Keeping a low profile despite driving a tractor trailer everywhere.
Exactly. [Laughs] I also want to know what they would listen to in that truck. I wonder what Hayley and Hope were jamming along to.

Right. It’s kid’s music and then Hope falls asleep and it’s…
Smashing Pumpkins. [Laughs] Or Hayley’s been learning French in the truck on like, what’s that…

We also have this new big bad. Hayley has worked so hard to keep Hope safe. How is she going to react when her daughter is potentially part of something she can’t control?
That’s what’s so terrifying about the big bad of the season is that they don’t really know much about it: They don’t know why it’s here; they don’t know what it wants, and once it starts to feel like maybe this is something directly affecting or 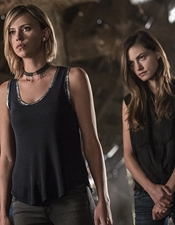 directly targeting Hope, that’s when everything gets serious. Once you’re talking about protecting a 7-year-old who doesn’t understand her powers yet or anything, that’s when the stakes become very high.

Are Hayley and Elijah on solid ground at this point? After five years apart, I feel like they deserve a moment of happiness.
Yeah, I think having not seeing him for five years there’s probably been five years of dreaming about the day that she would see him again, so I think the first time that they get to spend time with each other is hopefully this magical moment because it’s all she wanted. I think they love each other very much but you know as the season goes on, it becomes very clear that Hayley’s priority is being a mom and protecting her daughter.

And this week, I heard something about a disagreement with Freya. I assume that has to do with Keelin.
Yes. Hayley and Freya both have very similar back stories in that they have been without family, so when they finally did get family, they’re super protective of them. But it doesn’t necessarily mean that their ways for protecting their family are always going to align. There’s a couple of conflicting opinions between Hayley and Freya, but at the end of the day, they’re family and they have the same intention which is to protect each other and protect their family, and especially protect Hope. But they just sometimes have differing ideas of how to do that.

Phoebe Tonkin on how Hayley has grown, Klaus the dad and the new big bad

Quite a bit has changed since Season 3 of “The Originals.” With a five-year time jump, Hope (Summer Fontana) is no longer a baby and Hayley (Phoebe Tonkin) has done everything within her power to resurrect the Mikaelsons and reunite her daughter with her father Klaus (Joseph Morgan). And yet, the more things change the more they stay the same.

Hope has found herself back in New Orleans with the Mikaelsons as a new war readies itself, blurring the lines even further between vampires, werewolves and witches. With a villain targeting children and wreaking havoc on the French Quarter, Screener decided it was time to catch up with Tonkin to talk about the big bad, what Klaus is like as a dad and what changes for Hayley, now that the life she’s built over the last five years has been turned upside down…

Thus far, Hayley’s Season 4 has revolved heavily around getting the Mikaelsons back. Five years is a long time to spend alone, though. What has changed about her in that time?
Phoebe Tonkin: I mean, I think now — as it always has been, but probably now moreso because her daughter is older — her priority is just to protect and keep her daughter safe. And hopefully give her daughter somewhat of a normal upbringing. Hopefully.

That seems so entire impossible in this world they live in.
Yeah, it does!

Will we be getting any sort of look at what those five years were like for Hayley? Especially when you consider how fundamental a time it is for a child Hope’s age…
Yes, definitely. And I think Hope’s also had a lot of questions about where her family is, her bloodline, her father. I think as she got older, it became more urgent to get her family back, because she had so many questions about what was happening. Hayley has spent five years looking for the Mikaelsons relentlessly — I don’t think there was much room for anything else besides that. She was just super driven to find this cure, and be able to wake them all up, and get Hope’s father back. It’s important to her that Hope doesn’t grow up without a dad. 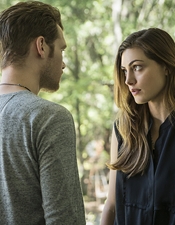 Hayley has very different relationships with Klaus and Elijah. Now that we’ve moved forward in time, how have those dynamics changed? Because you look at a character like Klaus, and he’s been living in torture for five years…
You know, I definitely think now that Hope is older, everyone is focused on protecting her — especially Klaus. Anything that comes close in any way to harming Hope… They’re just all very protective of her.

I think also, Hayley really wants Hope to feel like she has some sort of a normal family dynamic. So I think Hayley is going to have to put aside some of her grudges, or issues that she’s had in the past with Klaus, to make sure she feels like her mom and dad are in some kind of a functioning co-parenting environment.

Klaus reentering Hope’s life — does that change Hayley’s relationship with her daughter at all, given that it was just them for so long?
Definitely. She’s definitely tried to keep Klaus alive in conversation, and I think Hope probably has him on a pedestal because of how much Hayley has tried to keep her dad in the conversation over the last five years.

There are some nice moments between Klaus and Hope where he’s just a dad. He’s not this supervillain, he’s just a dad who is in love and wants to spoil his daughter.

That is a version of that character I cannot wait to see. Lastly, I wanted to talk about the villain of the season — which we’ve lovingly dubbed the “big, angry blue ball of light” around the office.
Oh it’ll get a name soon, don’t you worry! A name you will not forget.

We don’t know a lot about this particular villain, other than it’s targeting children — which is bad news for Hope. What can you tell us about it?
I think this is the most dangerous threat that has posed any sort of danger to this family. It’s the first time they don’t necessarily understand what it wants, or why it wants what it wants. It’s a very powerful entity of violence and pain. I think, as you said, it’s targeting children — which includes Hope — so all of these characters have to come together, even through their own complicated dynamics, and work together to fight this entity that’s potentially going to harm the one they all love.

It’s horrifying. This thing is very old and it’s something that’s been gathering power. A very serious, and dangerous, threat.

« Inside The Originals – 4×03 ‘Haunter of Ruins’ | Phoebe Tonkin Sounds Off on This Season’s Big New Threat…and a Lack of Romance? »